EHS means Electronic Hook Switch and is a feature that allows wireless headsets to accept and end calls directly by pressing a specific button. In other words, apart from the pure speech transmission, EHS makes call acceptance possible directly at the headset. By using EHS, telephones and headsets of different manufacturers can be combined. The snom EHS solution supports both wireless headsets from GN Netcom/Jabra as well as devices from Plantronics. This requires a corresponding connector at the headset.

The snom EHS solutions consist of an EHS adapter box and necessary cables.

NOTE: A third party accessory is available from Sennheiser, the splitter cable connects the headset's base station to a desktop telephone and the Snom EHS box.

More information regarding the Sennheiser CEHS-SP 01 can be found here.

If you want to know which headsets have been tested for compatibility, please have a look at the following list: Supported Headsets

Attention: Never forget, you have to restart your Snom Desk Phone after connect the Headset with a EHS Adapter to get the Headset working.

Supplied with the snom EHS Advanced

The connection of wireless headsets, with a transmitter/charger station connected by cable to the desk phone, from third party suppliers (Jabra, Plantronics, Sennheiser) is not always done in the same way.

Please note that the EHS connection on our phones has changed over time. The older devices, especially from the D7xx series, still had a 4 pin flat connector, here you need the cable shown in picture D.

The newer devices have a RJ12 Western plug as shown in picture A. Here only the labeling has changed from EXT to EHS over time. The EHS input is mostly hidden behind a black square protection cap. 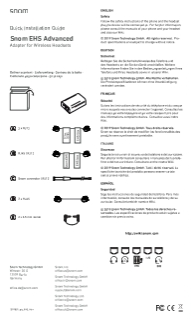 Supplied with the headset

The 4P4C audio cable is NOT supplied with the EHS Advanced. It comes with the headset base station and is connected to the headset port on the snom phone.

Which headsets work with the snom EHS Advanced?

Please note that this is not an inclusive list. Headsets not mentioned here may also work with the snom EHS Advanced, but they have not been tested by snom.

The information contained in this list is merely meant to assist you in finding a wireless headset or a wired USB headset that may be compatible with your snom desk phone. Please test any headset you wish to use with a snom phone prior to purchasing the headset. snom disclaims any liability for the accurateness, completeness, and currentness of the information published in this list. Although due care has been taken in the compilation and presentation of the information on this list, the data upon which it is based may have changed in the meantime. In particular, but not excluding other possible factors, the software on the third-party product may have been modified unbeknownst to snom, resulting in restrictions to functionality up to and including loss of compatibility with the snom phone.

For the list of tested and approved Jabra headets please visit our dedicated page.

Important note: To shift between RHL/DHSG/AEI (different EHS modes) make sure that the headset is placed in the base during this operation.

Please set the operating mode to “DHSG” (if available).

(1) Headset, headset base station, and 4P4C-4P4C audio cable not supplied with snom EHS Advanced.
Note: Foot stand needs to be removed temporarily for connecting the cable.

Here you can find older descriptions:

For the list of tested and approved Plantronics headets please visit our dedicated page.

Here you can find older descriptions: