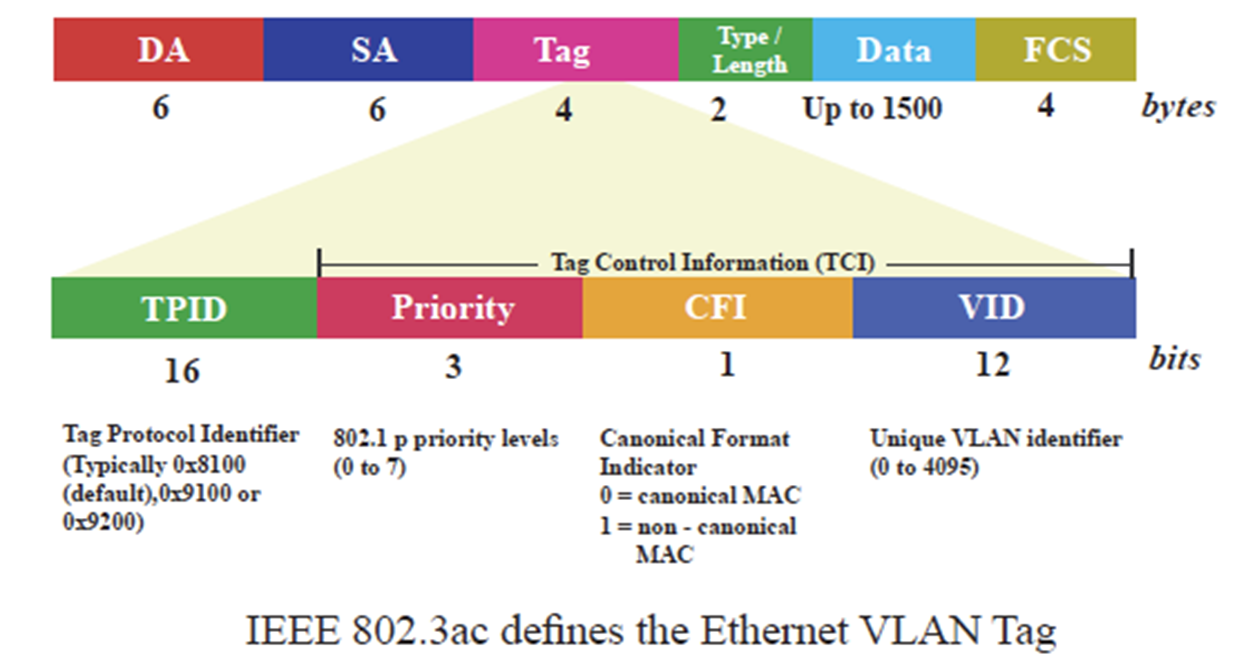 IEEE 802.1Q is an IEEE-standardized prioritization and VLAN technology that implements packet-based tagged VLANs, unlike older, port-based VLANs only. The term "Tagged" is derived from the term material tags, which are tags used to mark goods. So tagged VLANs are networks that use network packets with a special VLAN mark.

It sets the EtherType value in the Ethernet header to Tag Protocol ID(TPID) 0x8100, identifying this frame as an 802.1Q frame.  It then inserts an extra two-bytes of Tag Control Information(TCI) after the TPID, followed by another two bytes containing the frame’s orginal EtherType.  Together the four bytes of TPID and TCI are called the VLAN Tag.

Tags in the Ethernet frame

The 802.1Q standard defines data fields for VLAN tagging that are inserted into the data area of an Ethernet packet. This has the advantage that, as a rule, older switches can also forward such packets. The tag inserted consists of four fields with a total length of 32 bits. Two bytes are used for the protocol ID, three bits for the priority field, one bit for the canonical format indicator and twelve bits for the VLAN ID.

How it works according to IEEE 802.1Q

A unique number is assigned to each VLAN. This number is called VLAN-ID. A device that belongs to the VLAN with ID=1 can communicate with any other device in the same VLAN, but not with a device in another VLAN such as ID=2, 3,...

Prioritization with VLAN is also possible. One of 8 (3 bit) priorities can be specified for each frame (IEEE 802.1p). This makes it possible, for example, to forward voice data while HTTP data is slowed down. This functionality is becoming increasingly important, especially with regard to the increasing use of VoIP (IP telephony). This means that interference during telephone calls can be avoided even with'limited' bandwidth. (see also Quality of Service )