A Session Border Controller (SBC) is a network component for secure coupling of different computer networks.

to link external (insecure) data networks with internal (secure) IT structures or to implement so-called sessions.

An SBC enables the control and monitoring of signalling and usually also media streaming as well as the construction, implementation and dismantling of

Telephone calls or other interactive media involved in a communication. 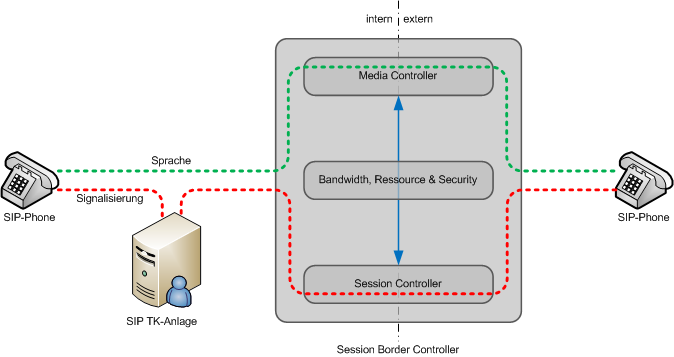 As the name suggests, an SBC is used at network boundaries and links internal and external networks. The SBC analyzes the different data streams (engl: sessions)

and, depending on the configuration, intervenes in the various data streams (here: voice or signalling data). In the field of IP-based telecommunications (VoIP)

A SIP -based telephone usually sends the signalling data to the telephone system, while the voice data is usually sent directly from telephone to telephone via the shortest route.

can be transmitted. By decoupling signalling data and voice data, the advantages of IP-based data networks can be exploited on the one hand, and on the other hand

the transmission of voice data (better media data) cannot be influenced by the telephone system.

An SBC combines the following functions:

Security Offloading Support of encryption techniques ( TLS , SRTP ) Media Pinholing Specific activation of UDP/TCP ports for transmission of media data Transcoding between different voice/video codecs such as  G.711 to G.729 Protocol Translation Conversion and adaptation for various signalling protocols such as SIP to SIP-Q (QSIG over SIP) Header Manipulation Customisation of SIP and SDP headers to adapt phone number formats (E.164) or IP addresses, for example Media Anchoring Coupling of voice data from SIP terminals that can only be reached via " Network Address Translation " Secure coupling of voice/video data.