Go to start of metadata 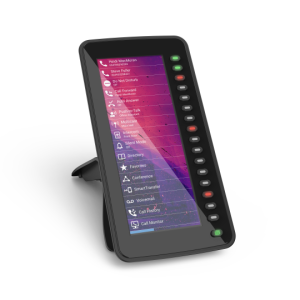 SAP-3756: In a certain multicast scenario when a caller (B) is accepted by a phone (A) that receives already a multicast page, the caller cannot hear the audio from callee (A). This issue is isolated to D717, D735 & D335.

→ No workaround. Please make sure that you do not use this version if you need > 1000 local phone book entries with the affected models.

SAP-5086: The warm dialing is not working as expected, if a number is entered before the configured timeout in setting auto_dial (3s in this case) the number entered is not dialed automatically - press OK key is needed.

→ No workaround. The required correction is already in the works, if needed a verification (alpha) version can be provided per request via Snom helpdesk

SAP-5625: The MJPEG support (e.g. for doorphone integration) is limited to work correctly only in idle state, but not in Ringing or Connected, - issue is under investigation.

→ No workaround. Please make sure that you do not use this version if you need MJPEG support for Ringing and / or Connected state

SAP-5633: After the download of an XCAP directory from XCAP server into the local phonebook the contact entries show extra information composed of odd number sequences, - issue is under investigation.

→ No workaround. Please make sure that you do not use this version if you need XCAP server directory support

SAP-5634: Editing of a contact in the phone book via the web interface is blocked if the setting use_hidden_tags is enabled

→ Workaround: temporally disable the setting to be able to edit a contact. The required correction is already in the works, if needed a verification (alpha) version can be provided per request via Snom helpdesk

SAP-5309: The D120 is not supported with this release . With respect to an essential part of our quality policy, we always strive to ensure a full level of downgrade-ability and backward-compatibility. By this, it was identified that the D120 cannot comply with this high standard as the other desk phone models. At least not without additional development efforts. Therefore the version 10.1.64.14 can not be provided.

Note: We had to stop our attempts to resume the continuous firmware support of the D120, due to facing critical impediments.

SAP-5942: Due to a regression the setting rtp_early_media_muted is broken, - no local ringback with early media. Related log statement: "[DEBUG0] MEDIA: RTP: no incoming early media packets, play ringtone instead".

SAP-3747: Branding files used by Phone Customization are now kept by firmware upgrades and removed by factory reset (WUI, PUI or recovery mode)
SAP-3968: The MAC of the WLAN access point is now shown for each SSID listed in the "Scan WLAN" view
SAP-4325: Additional improvements for the recently added feature for the Executive Assistant use case: Call on Behalf of Executive, also see: exec_assistant_enable and exec_assistant_identity #Broadsoft
SAP-4421: Inside the web user interface - WUI, the directory view (/adr.htm) is now split into multiple pages for support of large address books
SAP-4461: The configured registrar or user_outbound proxy is now used for TLS server certificate verification and presentation of the SNI extension, also see RFC 5922 section 4

SAP-3754: Invalid configuration content of a provisioning file provided by DHCP option 66/67 was parsed and erroneously applied, now it is ignored
SAP-4082: The gui_fkey_label text was not displayed if the type was "keyevent"
SAP-4112: When a custom-tailored color theme using Snom Live UI was provisioned the related settings were not applied immediately, typically an additional check-sync solved the issue
SAP-4227: The phone did reset the name & number presented from PAI when receiving PAI header from the second identical re-INVITE even with contact_source_sip_priority set to PAI
SAP-4395: In the webinterface the identity specific line_audio.htm did not load if use_hidden_tags is enabled and http_user, http_pass and admin_mode_password are set to none-default values
SAP-4459: If an Action URL is configured for an phonebook contact contains e.g.: /nphMotionJpeg?Resolution=640x480#mjpg the action was triggered, but the phone did send a malformed request, - which defects e.g. MJPEG doorphone integration
SAP-4625: The local XML phonebook was not working properly if updated through provisioning / import
SAP-4704: If the deprecated plain text provisioning (typically .cfg instead of .xml file) was used for fkey defined subscription using "dest" the subscription only did start after a reboot or log off / log in (now starts immediately)
SAP-4851: The phone reINVITE contained one m line with media profile set to SAVP, even if unencrypted RTP was initially negotiated, finally leading to an "488 Not Acceptable Here" case
SAP-4863: The old valid value "on" for smartlabel_idle_default & smartlabel_call_default was not accepted by newer firmware @D717 @D735 @D765 @D335 #3CX
SAP-4899: In the SDP response of an ACK message, the IP was missing (C line) due to a bug in SDP serialization, - which led into an MoH issue #Asterisk
SAP-5046: The link for an ID photo file uploaded via WUI did not point to the .png image due to an odd prefix (e.g.: ?1234567890) starting with a question mark
SAP-5051: If the setting legacy_digest_auth_behavior was enabled the prefix "sip:" was added to the challenge response but it was not taken into account by calculating the authorization header, so the PBX refused the registration with a 403 Forbidden
SAP-5066: After an attended transfer only the transferor (B) was listed in the call history of the transfer target (C), - but no entry for the transferee (A) was shown #3CX
SAP-5110: It was impossible to retrieve a parked call, due to a malformed To field (e.g. To: "park" <sip:*1234>) leading to a reject by the server #Freeswitch
SAP-5112: The XMPP provided contact list was not updated instantly (only after a reboot) if e.g. a name was modified or a contact added / deleted #Broadsoft
SAP-5152: The dial tone for the USA/Canada was played distorted @D3xx
SAP-5187: During dialing a number one additional identical LDAP query was sent subsequently to the configured LDAP server
SAP-5209: Under certain circumstances, the local phone book data became unavailable #3CX
SAP-5318: The watchdog could potentially stop / interfere with a firmware update if watchdog=off is also provisioned
SAP-5331: If the feature: extend_context_key_in_idle is enabled and the Key Event type F_NONE is assigned to an extra softkey page its label duplicated the corresponding key label from page 1
SAP-5375: The first contact presented in the result-list was not pre-selected and no scrollbar was shown in PUI after a search with Snom QuickLookup @monochrome-display-phones
SAP-5382: Provisioning a firmware URL via the setting firmware resulted in an update loop if the URL didn't contain the port
SAP-5389: The Music on Hold, MoH SIP INVITE interfered with the local 2+1 local phone MCU conference call #Metaswitch
SAP-5411: The MWI / F_RETRIEVE indicator LED and message was erroneously turned off when a NOTIFY of Content-Length: 0 was received
SAP-5412: The support for XML definitions on Fkey dkey_retrieve was broken
SAP-5418: The content / value length for Fkeys was accidentally limited to 1048 bytes, which led to truncation of large XML Definitions
SAP-5458: Several import & export-related issues solved in the context of photo usage, the large local phone book feature, and the removal of birthday attribute from the contact element
SAP-5495: The phone immediately crashed in the event of a call pickup that is directly followed by a SIP replaces header, intended to force a display update
SAP-5563: If a subscription was defined by fkey using "dest" on SmartLabel, label panel or UXM, it did not correctly update its icon in accordance with the state of the monitored extension, as FKEY type BLF does

This page has no comments.